This article describes the features of the AXCIOMA Execution Framework (ExF).

The AXCIOMA Execution Framework (ExF) provides developers full concurrency control for component based applications. AXCIOMA ExF is a commercial extension provided by Remedy IT. It can be installed as plugin within a AXCIOMA development environment.

AXCIOMA ExF decouples middleware event generation/reception and component event handling in such a way that the component developer is guaranteed to be safe from threading and code reentrancy issues without losing the ability to fully use multithreaded architectures to scale applications.

AXCIOMA ExF will capture and encapsulate events for any interaction pattern or connector implementation (synchronous requests, asynchronous replies, state and/or data events, or custom connectors) allowing them to be asynchronously scheduled and subsequently handled in a serialized manner.

In the default AXCIOMA distribution the connection between connector instances and components will be a direct local calling connection for each port interface resulting in the most optimal execution sequence from event generation/reception to the handling of the event.

This connection scheme is depicted in the Figure 1.

In this scheme the component provides an interface reference of it’s facet executor to the receptacle of the connector. When receiving (or generating) an event the connector will now be able to directly call the component’s executor through the provided reference allowing the most optimal execution sequence.

Potentially however this connection and execution scheme provides the developer with serious concurrency challenges as the component now has no control over the execution context in which it’s code is called as it is the connector code that determines that execution context.

Apart from concurrency issues there is also the risk of reentrancy in certain middleware implementations like TAOX11. It’s thread reuse features are powerful latency boosters but may cause unexpected challenges for component developers.

AXCIOMA ExF provides a solution to these challenges by decoupling the direct local connection between connector and component instance and providing an execution framework offering controlled asynchronous, priority based event handling.

AXCIOMA ExF provides a solution for concurrency challenges by implementing an execution framework that places scheduling lanes between the connector and the component instances as schematically depicted in Figure 2.

This execution sequence is depicted in the following figure.

Although these figures show a completely different, more complex, organization of components and code than with the standard (non-ExF) connections in AXCIOMA this has zero consequences for component developers (except in allowing more simplified code as threadsafety and NRE execution are guaranteed).

All changes in code are either in the, interaction pattern independent, ExF framework components or in the, fully generated, connector implementations. In the end the execution of the component code handling the event will happen in the exact same way as in a setup without ExF using the unaltered component interfaces. Binary (compiled) component artifacts can in fact be deployed in environments utilizing regular or ExF enhanced containers without the need for recompilation.

The deployment plan is also not affected by ExF. The ExF core modules loaded (configured) into the DnCX11 framework handle this additional connection setup automatically. The deployment plan will still only specify a connection between a port of the (ExF capable) connector instance and the component instance.

This process is depicted in Figure 4. 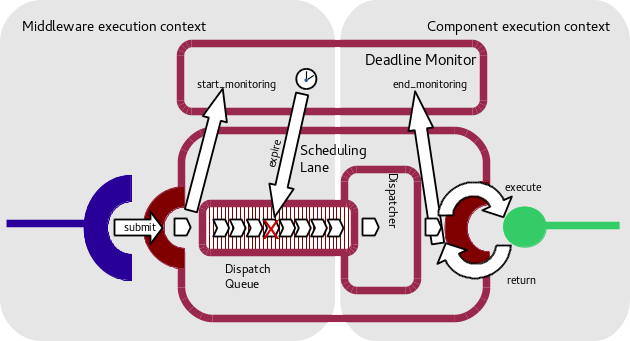 Scheduling lanes accept (encapsulated) middleware events intended for specific component instances and route these to their associated dispatcher through the dispatch queue.

Dispatchers dequeue scheduled events and route these to their targeted component instances.